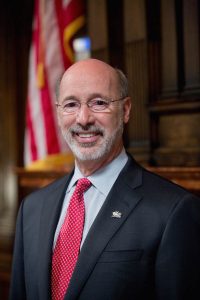 Tom grew up in a small south central Pennsylvania town in York County and still lives in the house he was brought home to from the hospital.

Tom left York County to attend college at Dartmouth, but he interrupted his studies to join the Peace Corps and served two years in a small village in India before returning to finish his undergraduate degree. He later earned graduate degrees from the University of London and the Massachusetts Institute of Technology.

While finishing his PhD, Tom worked as a forklift operator and warehouse worker in the family business, the Wolf Organization, a distributor of lumber and other building products based in York, Pennsylvania. After graduating, his first full-time job was running a Tru-Value hardware store in Manchester, Pennsylvania.

Later, with two cousins, Tom took a risk by securing a loan to buy the family business. Over the course of 25 years, Tom and his cousins grew the Wolf Organization — eventually more than quintupling the business in size — before selling the company in 2006.

Then in 2007, Tom took the job of secretary of revenue in Governor Ed Rendell’s cabinet, where he instituted reforms that grew and strengthened the state lottery and laid the foundation for millions of dollars in additional benefits for Pennsylvania’s seniors.

In early 2009, in the depths of the recession, Tom returned to The Wolf Organization — the family company he had spent more than two decades building and growing — when it was on the brink of bankruptcy. Tom immediately ended his gubernatorial campaign, bought back the business, and got to work reinventing the company.

Through innovation and smart investments, Tom was able to turn the company around. He changed the Wolf Organization’s business model, transforming it from solely a supplier of other businesses’ products into a company that sources its own American-made cabinets and competes directly with overseas manufacturers. Tom also made stronger investments in his employees because he knew that it was their work that truly made the Wolf Organization successful. So at a time when many businesses were cutting benefits, Tom continued to provide his employees comprehensive health and retirement benefits and continued returning 20 to 30 percent of the company’s profits back to workers.
Tom’s leadership philosophy is an extension of his lifelong investment in community development. In addition to serving on and leading the boards of numerous organizations dedicated to education, health, welfare, economic development, culture, and the arts, Tom has rolled up his sleeves to help build a Little League baseball field in his community, volunteered in soup kitchens, and painted a local school. Tom and Frances, his wife of 39 years, still live in York County and have two grown daughters, Sarah and Katie.

Since taking office,Tom has taken a number of steps to make Pennsylvania a better place. As Pennsylvania governor, Tom is focused on three simple goals: jobs that pay, schools that teach, and government that works.

Tom knows that to rebuild the middle class, we need new ideas to create middle-class jobs that pay and policies that support our manufacturing and new growth industries. Since Tom took office, nearly 100,000 more Pennsylvanians are employed than before. . Just last year, Tom’s economic development team completed 58 relocation and expansion projects like the creation of an eBay office in Northeast Pennsylvania, a major Fedex expansion in the Lehigh Valley, a large Amazon expansion across Pennsylvania, the investments in the Philadelphia port, and the Shell Cracker plant in Western Pennsylvania. To make sure Pennsylvania is a leader in manufacturing, Tom created a tax credit for manufacturers who create jobs in Pennsylvania.

Tom is fighting to increase funding for our schools to reverse the devastating $1 billion in cuts made to schools five years ago that led to larger class sizes, soaring property taxes, educator layoffs, and the elimination or reduction of vital programs. Tom has made clear his strong commitment to education in Pennsylvania by fighting to restore critical education funding cuts, provide unprecedented support to high-quality pre-k programs, ensure students are college and career ready, and making sure funding is distributed fairly.

As a result of his fight for greater investment, schools will receive an additional $460 million in two years for K through 12 education, along with millions more for Pre-K and colleges. Tom continues to advocate for increased funding for Pennsylvania schools to deliver high-quality education to every student across the state, regardless of zip code. We must make investments to adequately and fairly fund our education system in order to lay the foundation for long-term economic growth in Pennsylvania.

Tom has made fighting the opioid crisis a top priority of his administration and is continuing to work across the aisle to address this looming public health issue. He is the advocate that families struggling with addiction need in Harrisburg.

Tom provided funding to implement 45 treatment centers throughout the commonwealth and has expanded access to treatment for nearly 75,000 people with substance use disorder. Under his leadership, Pennsylvania also recently launched a prescription drug monitoring program that will allow prescribers and dispensers to query and report information regarding the number of opioids prescribed, and to whom and recently announced new prescribing guidelines for the safe and effective use of opioids.

Tom expanded health care access to nearly 700,000 Pennsylvanians, keeping them from either not seeking care or going to the emergency room, which raises costs for insured residents. The governor’s action has dropped the commonwealth’s uninsured population from 14 percent in 2013 to 6.4 percent today. Tom also saved 3,600 children from losing Children’s health insurance, and he fought to save 180,000 seniors from losing their Medicare Advantage.

Tom is taking on the status quo by forcing government to change. In two years, Tom has made government more efficient and responsive while saving hundreds of millions. He is going to continue to fix state government and make a government that works. Tom signed an executive order establishing the Governor’s Office of Transformation, Innovation, Management, and Efficiency (GO-TIME).

GO-TIME will leverage inter-agency coordination and collaboration to maximize efficiency, modernize state government operations, and provide the highest quality services. State agencies saved over $156 million. With his first savings goal of $150 million exceeded, Tom is now challenging GO-TIME to build upon this success by achieving $500 million in savings by 2020.

Tom has always been a different kind of leader and he has brought this experience to his role as governor. Since day one in office, Tom has fought for the people of Pennsylvania and he will continue to serve the best interests of the commonwealth.