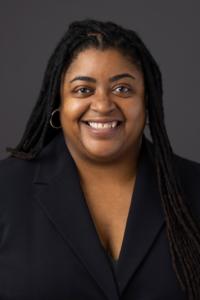 Associate Clinical Professor Tiffany Sizemore joined the faculty of Duquesne Law School in August 2015. She developed and directs the Youth Advocacy Clinic. The clinic represents children in delinquency matters, and parents and children in special education and school discipline matters. Prior to joining the law school, Sizemore was the Deputy Director for the Juvenile Division at the Office of the Public Defender (OPD) in Allegheny County, Pennsylvania, where she served for over two years. As Deputy Director for the Juvenile Division at OPD, Sizemore managed eleven full-time juvenile defense practitioners, who appeared before approximately one dozen family court judges. Sizemore was also responsible for the development and training of those lawyers in all aspects of the practice. During her time at OPD, she also did significant policy work with a variety of stakeholders in the delinquency system in order to ensure the best possible outcomes for the children it serves. As Deputy, Sizemore wrote and implemented new practice standards across the juvenile division at OPD. Those standards are in compliance with the national practice standards, as promulgated by the National Juvenile Defender Center. In 2019, Professor Sizemore was chosen as one of Robert Wood Johnson Foundation’s Interdisciplinary Research Leaders to study the Holistic Research Model used in the clinics. Also in 2019, Professor Sizemore was appointed to Governor Tom Wolf’s Juvenile Justice Taskforce, which is charged to examine and propose needed reforms to the Pennsylvania’s juvenile legal system.

In addition to her extensive trial experience in both criminal and juvenile delinquency court, Sizemore sits at many policy and stakeholder tables related to these issues. In 2014, Sizemore was accepted into Georgetown University’s Center for Juvenile Justice Reform Multi-System Integration Certificate Program as part of a team from Allegheny County that developed a Capstone Project which seeks to improve outcomes for children who are involved in both the delinquency and dependency systems. Sizemore was a member of the Commonwealth’s Juvenile Court Procedural Rules Committee from 2013-2019. She was first appointed by The Honorable Justice Debra Todd in 2013.  In November 2013, Sizemore joined the Board of Directors for the Juvenile Defenders Association of Pennsylvania. In January 2014, Sizemore joined the Board of Directors for Youth Enrichment Services, a mentorship and youth development program based in Pittsburgh. Sizemore served as the Board Chair for the Alliance for Police Accountability in 2016, a grassroots activism and policy organization based in Pittsburgh. She is currently the Board President for the Juvenile Defender Association of Pennsylvania and sits on the advisory Board for the National Juvenile Defender Center’s Northeast Regional Center. In 2019, she also began serving on the Board of Directors for the Neighborhood Legal Services Association in Pittsburgh.

Prior to being in Allegheny County, Sizemore was a trial attorney for eight years at the Public Defender Service for the District of Columbia, which is widely regarded as the premier public defender organization in the country. In addition to being a trial attorney, Sizemore was a supervisor in the juvenile section for approximately one year immediately preceding her move to Pittsburgh. While at PDS, she represented clients in cases from presentment through disposition of the case, and handled serious violent felonies, including: homicide, sexual assault, armed robbery, armed kidnapping, and armed carjacking. Sizemore spent approximately two years handling almost exclusively juvenile cases at PDS. As a litigator, her work has also included representing witnesses to crimes, targets of grand jury investigations, and defendants in diversionary courts, e.g., mental health court or drug court. She was a member of PDS’ hiring committee for seven years.

Sizemore has conducted numerous trainings, including training on the following topics: fundamentals of the rules of evidence, effective juvenile disposition advocacy, how to prepare for an interview as a public defender, education advocacy basics for public defenders, juvenile competence to stand trial, preparing for transfer hearings, fundamental trial skills training (i.e., opening statements, cross-examinations, closing arguments, development of defense theme and theory), and others. Sizemore is a nationally certified trainer through the National Juvenile Defender Center’s Juvenile Training Immersion Program, and joined the faculty of NJDC’s Summer Academy in 2016. Additionally, Sizemore has judged many mock trial competitions, and appears regularly on panels discussing indigent defense representation for both children and adults, as well as education and juvenile justice policy reform. The work of Sizemore’s Juvenile Defender and Education Law Clinic has been featured many times in local media outlets including: The Pittsburgh Post-Gazette, Public Source, WESA-FM, and the historic Pittsburgh Courier.