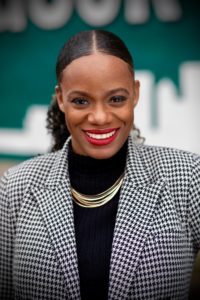 Born and raised in the Mon Valley, Summer Lee is a dedicated organizer, attorney, and Democratic state legislator representing the 34th State House District. A proud alum of Woodland Hills public schools, Summer graduated from Penn State and Howard University School of Law, where she focused on civil rights and social justice advocacy. She returned home to organize her community, joining the Fight for $15 to increase wages, leading voter mobilization efforts for the Pennsylvania Democratic Party, and spearheading a successful write-in initiative that transformed the local school board.

In 2018, at the urging of her neighbors, Summer threw her hat in the ring for State House – taking on a 20-year incumbent, doubling voter turnout, and winning with over 67%of the vote. She also made history, becoming the first Black woman from Western Pennsylvania ever elected to the legislature.

Throughout her time in office, Summer has been a voice for working families, and a champion for workers, environmental justice, reproductive rights, health care for all, and voting rights. She is a tireless advocate for our labor movement, strengthening unions, protecting the right to organize, and raising wages. She has taken on fossil fuel companies profiting from pollution and won; led the passage of urgently needed police accountability measures through a Republican-gridlocked legislature; and as a member of the Equality Caucus, fought to create inclusive, equitable policies for all LGBTQ+ Pennsylvanians. In 2019, Summer became the cofounder and chair of UNITE, a group that has expanded the electorate, welcomed Democratic voters in to the political process, and elected slates of progressive leaders up and down the ballot across the region. Summer has also brought millions back to her community for infrastructure upgrades and community revitalization.

Now, Summer is running for Congress in PA-12 to deliver real power for our communities, and real progress towards economic, racial, and environmental justice. If elected, she would again make history as the first Black woman ever elected to Congress from Pennsylvania. She is running a people-powered campaign to build a brighter future where all working people can thrive.