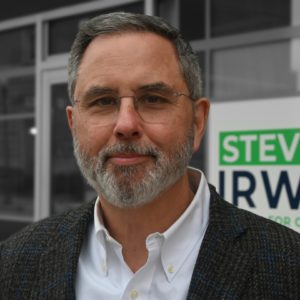 Candidate for: Member of Congress—District 12

A veteran of the Korean War, Steve’s father worked as a butcher and his mother as a secretary for a rabbi. Through them, Steve was taught the importance of community service from a very young age. Growing up as the oldest son in a tight-knit family of five, their teachings of dignity, humanity and respect shaped Steve’s outlook and would eventually inspire him to become a fierce advocate for the separation of church and state.

This led him to becoming deeply involved with the Anti-Defamation League when he was older, serving as an associate national commissioner, and today as the Pittsburgh member of the organization’s regional board. After graduating from public high school, he attended Harvard University on a scholarship, graduating with a Bachelor of Arts in Government. He then attended law school at Georgetown University, paying his way with scholarships, loans, and various extracurricular jobs.

During more than thirty years of service, Steve has held posts in all three branches of Government — executive, legislative and judicial — at the local, regional, state and national levels.

In his first job in government, Steve helped reduce disparity in criminal sentencing by developing recommendations that led to a transition from indeterminate sentences to sentencing guidelines. He then spent five years in Washington D.C. as Legislative Assistant in the United States Senate. In the Senate, Steve fought for appropriations, transportation, the environment and education policy, and acted as his primary monitor of proceedings in the Chamber.

• Governor Ed Rendell appointed Steve to lead the Pennsylvania Securities Commission, where he fought Ponzi schemes and other financial fraud, oversaw enforcement, and chaired the committee that established the federal legislative agenda for state securities laws for all 50 states. He eventually rose to President-elect of the North American Securities Administrators Association and was awarded the Blue Sky Cube, the highest honor bestowed by state securities regulators.

A longtime loyal Democrat and activist, Steve is ready to take on the one role in politics that he has not yet played– that of candidate! As a member of the Allegheny County Democratic Committee for more than three decades, he has volunteered at every level of a campaign – going door-to-door to speak with voters, fundraising, developing policy – for fellow Democrats seeking a number of offices, including running the campaigns of four Democratic nominees for Pennsylvania Attorney General. He’s also chaired a statewide judicial campaign.

Because of Steve’s omnipresence in political circles, Public Access Television invited him to create his own politics-focused television show, Political Jungle.

A relentless and dynamic fixture in the community, Steve has spent decades as a volunteer at countless nonprofits, such as Big Brothers Big Sisters, the Carriage House Children’s Center, the Greater Pittsburgh Community Food Bank, Squirrel Hill Urban Coalition, Pittsburgh’s Downtown Community Partnership, and so many more.

Steve has not only provided visionary leadership on non-profit boards, but also as a volunteer reading to elementary school students through Reading is Fundamental, as a Big Brother – Steve’s Little Brother is now 47 years old! – and helping to produce the musical satire Off the Record, which has underwritten millions of meals for the Pittsburgh Community Food Bank. Steve also led Sustainable Pittsburgh, the region’s leading organization training municipal government and the community to balance economic, environmental, and equity needs with the goal of ensuring a sustainable future.

Steve is a father of three: Jillian, a doctor, Jesse, a media producer, and Rose, a high school junior. He was honored to be named an inaugural Father of the Year by the American Diabetes Association, which runs this nationally recognized program. His wife, Andi, a talented artist who honed her skills while attending Carnegie Mellon University, paints abstract pieces centered on the intersection of art and technology. As a result, Steve often finds himself immersed in her involvement with the world-renowned Mattress Factory and other art institutions throughout Pennsylvania and beyond.

Steve has had a distinguished career as an attorney, earning the highest rating by his peers in ethics and legal ability, and has repeatedly been named a Pennsylvania Super Lawyer. He has litigated complex commercial, construction, employment and regulatory matters, exposing price fixing, illegal discrimination, and political corruption.

At Georgetown Law School, he was invited to join three law journals, and, upon graduation, clerked for the second highest court in the United States, under the Hon. Joseph F. Weis, Jr., for whom the federal courthouse in Pittsburgh is named.

Steve was an avid rower and rowed competitively nationally and internationally with great success, winning a gold medal and two silver medals at US Rowing’s Masters Nationals, in the Quad and in the Eight, respectively. He was president of the board of Three Rivers Rowing Association (TRRA), a member of the Board of Governors, and Chair of the Stewards of the Head of the Ohio regatta.

Under Steve’s leadership, TRRA was named the first Community Rowing Club of the Year by US Rowing for expanding access to the water for LGBT, disabled, and minority youth athletes.

Steve has played music, mostly accordion, on the professional stage since the age of 11. Through the years he has explored a range of genres ranging from klezmer to roots rock to a cross between Johnny Cash and the Clash, with bands such as The Faves, the Surreal McCoys, Guaranteed Irish, Phat Mandee, and Solomon & the Wise Guys. “Rosie Rose,” a song on the Surreal McCoys’ album The Bottle and the Gun is a song Steve wrote about his daughter on the eve of a heart surgery she had to undergo when she was young.