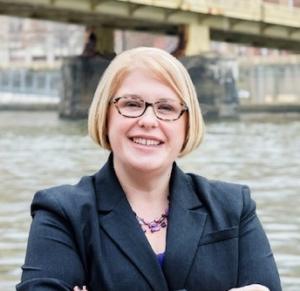 Hard work, respect for others and public service are values that exist in the core of every lesson Sabrina’s parents taught her. Raised in a union household, Sabrina’s father worked for decades as a loyal and dedicated laborer. Her mother devoted her career to lifting up others at the Visiting Nurses Association. Together, Sabrina’s parents devoted their time and resources to Sabrina and her sister, supporting Sabrina’s educational achievements and coaching her into a star softball player and a state champion bowler. A proud working class family, Sabrina’s parents always ensured that she had access to a quality public education, a sense of community, and encouragement to find her own path to make a positive impact in the lives of others.

Sabrina received her degree in Political Science and Legal Studies as a student in the Honors Program at Susquehanna University in Selinsgrove, Pennsylvania; while there, Sabrina was a leader in her local chapter of her sorority. Sabrina attended the University of Pittsburgh School of Law where she received her Juris Doctorate and served as President of the Student Bar Association. Although receiving partial scholarships for her academic accomplishments, Sabrina worked multiple jobs during her time in college and law school to pay tuition and bills and it is that work ethic that has always stayed with her.

Sabrina has devoted and dedicated her entire legal career to saving the lives of domestic violence victims and their children. Sabrina is the Legal Director at the Women’s Center and Shelter of Greater Pittsburgh where she has worked since 2002. Her practice focuses on providing free legal representation to victims of intimate partner violence, primarily in cases involving family law matters such as protection from abuse, custody, child and spousal support, and divorce, so that domestic violence survivors can obtain justice, autonomy, safety, and restoration.

Sabrina also supervises the Women’s Center and Shelter Civil Law Project; since its creation in 2001, Sabrina has managed the legal representation of survivors of domestic violence in over 7000 cases, regularly serving victims of domestic violence, sexual assault and the refugee, immigrant and limited English proficiency population in Allegheny County. Additionally, Sabrina works tirelessly to improve the justice system in ways that provide transparent and easier access to the Courts and that protect and serve those who are most resource burdened while they negotiate their safety under life threatening conditions. Sabrina works passionately to establish best practices that promote safety, respect and equal and open access to justice for all litigants who seek relief through the court system. Additionally, Sabrina regularly serves on educational and policy panels as an expert in domestic violence dynamics and has taught hundreds of attorneys how to handle pro bono Protection from Abuse cases.

Community is extremely important to Sabrina. She has served as the Secretary of the local PTO and as a Board Member of her local Women’s Club. She was elected as a Democratic Committee Woman and Secretary of the Ross Township Democratic Committee. She devotes her free time to supporting democratic candidates in local, state and national campaigns. Her biggest success is also her most important role – being a mom and supporting her daughters’ activities and achievements.