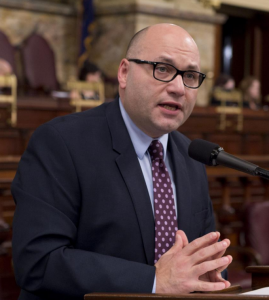 As a teen and through college, Matzie worked as an on-air personality and program director at WMBA Radio in Ambridge. He continues to cover high school sports, when his schedule permits, as a play-by-play announcer for the Management Science Associates Sports Network (msasports.net), which is heard throughout the tri-state area and on the Internet.

Prior to his election to the House in 2008, Matzie worked as a state Senate staff member for 14 years, served as Mayor of Ambridge, and was elected to the Democratic State Committee to represent Beaver County. In addition, he was appointed as a member of the multi-municipal committee that developed a joint comprehensive plan known as SHALE, which includes the municipalities of South Heights, Harmony Township, Ambridge, Leetsdale and Economy. Matzie was also appointed as a member of the Beaver County Bridge Committee, which oversees the rehabilitation and continued maintenance of all county bridges, and he currently serves on the Penn State Beaver Advisory Board.

Shortly after he was sworn in, Matzie’s legislation was chosen as one of the first key pieces of legislation pushed in the 194th session by House leaders. Act 2 was signed into law on June 3, 2009. The legislation makes COBRA health insurance coverage available to Pennsylvania businesses with fewer than 20 employees.

Another proposal by Matzie was included in Act 14 of 2010. The Health Insurance Coverage Parity and Non-Discrimination Act brought Pennsylvania’s insurance law in line with new federal requirements, and gives the Pennsylvania Insurance Department authority to enforce those laws in the state’s insurance market. The measure brought Pennsylvania into compliance with the following federal laws: Mental Health Parity and Addiction Equity Act, Genetic Information Nondiscrimination Act and Michelle’s Law, which protects a dependent child in college who must take a leave of absence for medically necessary reasons and continues coverage to one year after the leave of absence begins or the date coverage would otherwise have terminated.

Eleven months into his first term Matzie was notified that the fate of Old Economy Village in Ambridge remaining open was in jeopardy. He quickly recognized that the funding cuts would lead to changing the way Old Economy and the Pennsylvania Historical and Museum Commission (PHMC) as a whole would operate. While change was imminent his efforts along with others helped convince the Rendell Administration that the site should remain open and led to the PHMC and Friends of Old Economy to reach an agreement to operate the site.

His work was identified by the Speaker of the House as reason for selection to the House Tourism and Recreation Committee. In 2011, Matzie’s commitment to the importance of our commonwealth’s history and heritage led to the adoption of his proposal to creating the Subcommittee on Tourism Promotion, History and Heritage when new House rules were adopted. In January 2011, Democratic Leader Frank Dermody appointed Matzie to the PHMC as one of two House members serving on the Commission.

Other highlights of his first term include support for many development and infrastructure projects that received millions of dollars in funding, saving taxpayers money and creating and preserving jobs. Among the projects that received funding are the Northern Ambridge Redevelopment Project, Ambridge Municipal Authority upgrades, City of Aliquippa Municipal Water Authority expansion, Baden Memorial Library renovation, Municipal Authority of Leetsdale pump station upgrade and the Leetsdale Industrial Park Rail expansion, among others.

Matzie, who was sworn into his fourth term on January 6, 2015, said he will continue to work on many levels to make the 16th Legislative District and all of Western Pennsylvania a wonderful place to live, work and enjoy time with family and friends. The 16th District consists of part of Allegheny County, including Leet Township and the borough of Leetsdale; and part of Beaver County consisting of the city of Aliquippa, Harmony and Hopewell townships and the boroughs of Ambridge, Baden, Conway, East Rochester Economy, Freedom, Monaca, Rochester and South Heights.

Matzie, who was first elected to represent the 16th Legislative District in 2008, is married to Patty and they have a school-age daughter, Claire. He is the son of Andrew (Jr.) and Catherine (Kay) Matzie of Ambridge and has two brothers; David of Rochester and Michael of Ambridge.