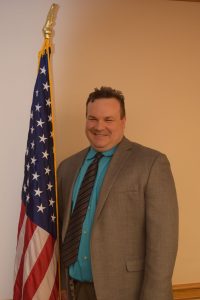 ABOUT ROB RHODERICK
Providing Harrisburg with a Much-Needed Adjustment

Rob Rhoderick has the right combination of experience and integrity – professional, legislative and community-focused – and has demonstrated that he will be a leader in the Pennsylvania House of Representatives.

While putting himself through college, Rob Rhoderick worked as a warehouseman. As a member of Teamsters Local 205, Rob learned valuable lessons on the importance of workers’ rights and the stability that good paying jobs provide to our middle class families.

In 1997, Rob founded the Rhoderick Chiropractic Clinic, opening two Washington County offices. Currently his practice is situated on the border of Forward and Elizabeth townships in Allegheny County. As a small business owner, Rob has served as a leader in his community. He is the Past President of the Charleroi Rotary and a passionate advocate for local economic development initiatives. He has provided quality chiropractic services to thousands of patients in the Mon Valley including many of our valued seniors. Families have come to depend on his expertise, reliability, and gentle nature.

Interested in local government, Rob successfully ran for a position on the Allegheny County Democratic Committee, and is now the Chairman of the local Committee in Elizabeth Township. In 2011, Rob was elected to a two year term on the Elizabeth Forward School Board. As a School Director, Rob is committed to challenging the cutbacks that the state is forcing on public schools. Under his leadership, Elizabeth Forward has cultivated a STEM education program that is the envy of the region. He is dedicated to providing a quality education to all students while also keeping his promise not to raise school taxes.

A call to service also led Rob to accept an unpaid position as a Legislative Aid to State Representative Bill Kortz in 2009. In this capacity, Rob met with local leaders to promote policy issues and provide support from the state government. After several years of working alongside Rep. Kortz, Rob took a paid position as Rep. Kortz’s legislative assistant following the departure of his Chief of Staff. Rob recently resigned from Rep. Kortz’s office to seek the Democratic Nomination for State Representative in the 39th District.

Rob is a lifelong resident of the 39th District. He grew up in Forward Township, and is now raising his family in Elizabeth Township. Rob is an active sports enthusiast, and enjoys fishing and target shooting.

Experienced and Committed, Rob Rhoderick is dedicated to improving the lives of our families.