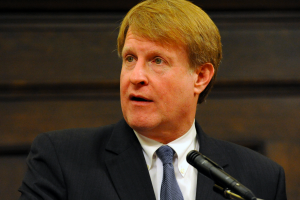 Rich grew up in Pittsburgh’s Bloomfield-Garfield neighborhood.  He earned his B.S. in Mechanical Engineering with a business minor from Carnegie Mellon University.  Rich started a small business, Aquenef, which provides water treatment equipment and services for industry in the Western Pennsylvania region.

Rich worked on the campaign to change the form of government in Allegheny County.  In 1999, he ran for one of the district council seats on the newly-formed County Council and was elected to represent a district that included suburban municipalities and city neighborhoods.  He held the seat for twelve years and was elected as Council President four times before leaving to run for the office of County Executive.

As County Executive, he is focused on economic development of the region and job creation and works with companies on a weekly basis to address the issues that are priorities to them in growing and being supported in the county.  That focus includes making our airport better, ensuring our public transit system is reliable and sustainable, and providing a climate where a skilled workforce is a key component of our growth.  Rich’s interest in making government more effective and efficient began with the consolidation of row offices when he was on Council, has expanded to include a top to bottom review of county departments and functions by the County Manager and direction to make changes to ensure that county government is responsive to taxpayers and protects their interests.

He and his wife, Cathy, a pharmacist, live in Squirrel Hill.  They have eight children.