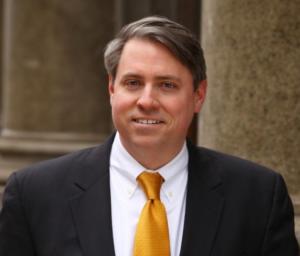 Patrick Allen Sweeney was born at Magee Hospital in Oakland to Mary Beth (Allen) and John Sweeney on July 2, 1970. He spent his youth living in the Brighton Heights section of Pittsburgh’s North Side, attending St. Cyril’s along with his sister, Maureen. The Sweeney family moved to Indiana, Pennsylvania when John Sweeney took a job teaching at Indiana University of PA (IUP). After graduating from Indiana Area Senior High School, Patrick enrolled at the University of Pittsburgh, where he earned a bachelor’s degree in Economics in 1992. He went on to the University of Pittsburgh School of Law, earning his JD in 1996.
While studying for the bar exam, Patrick served on the Congressional staff of Representative Mike Doyle. Upon passing the bar, he began his legal career, working for the colorful attorney, Joseph Buckley of Brookville, PA, getting a taste for the life of a country lawyer with a varied practice, one that took him to several rural counties throughout the region.

The lure of public service was strong, however, and a job as an Assistant Public Defender for Allegheny County was too good an opportunity to pass up. In 1997, Patrick joined the Public Defender’s office under then Director (now Judge) Kevin Sasinoski, and for the last 23 years, he has worked tirelessly on behalf of indigent clients in that office.

Working in nearly every capacity in the office, Patrick has appeared in every division of the Court of Common Pleas as a Public Defender; working in Family Division on behalf of clients in Juvenile Delinquency cases, Preliminary Hearings, Civil Contempt cases, appeals of Mental Health commitments in Orphan’s Court, and for the last 20 years, he has also been trying cases in the adult Criminal Division.

Patrick’s experience includes dozens of jury trials, hundreds of non-jury trials, and he has counseled thousands of clients as a Public Defender. He has handled every type of case from shoplifting to Homicide. Over the years, Patrick has trained and mentored new attorneys, as well as those transitioning into the Trial Unit. On a daily basis, Patrick is in court, fighting for individual rights and equal justice under the law.

This extensive and varied trial experience gives Patrick a unique degree of preparation for the bench. He was recommended by the Allegheny County Bar Association for the position of Judge of the Court of Common Pleas in 2015 and again in 2021.
A member of the Allegheny County Bar Association, Patrick is also a member of the Council of the Criminal Practice section.

In addition to his duties as an attorney, Patrick was elected union steward and eventually bargaining unit Secretary by his co-workers to fight for the rights of his fellow employees, as the Public Defenders (along with the District Attorneys and Crime Lab scientists) are members of the United Steelworkers Local 3403-74.

Still a member of Mary, Queen of Peace parish from when he lived on the South Side for 20 years, Patrick volunteered his time with the parish St. Vincent de Paul Society, working with the poor of the South Side and Hilltop neighborhoods. He also served as Steering Committee chair for the parish fundraising effort in 2013. Patrick is a member of the Ancient Order of Hibernians Division 23 (an Irish Catholic cultural organization), and was the solicitor for the County Board of the AOH from 2008-2011.

Additionally, Patrick moved back to the North Side in 2013 where he serves as Vice President of the Allegheny City Central Association (the neighborhood advocacy group for the Central North Side). He is also a member of the Teutonia Mannerchor (a German cultural organization in Deutschtown) and is a member and regular at the Allegheny Lodge of the BPOE (Elks), famous for hosting “Banjo Night” every Wednesday at their lodge on Cedar Avenue.

Patrick’s long history of service and dedication to the Democratic Party is unmatched.

After enrolling at the University of Pittsburgh, he joined the Pitt University Democrats, volunteering for several campaigns, and completed internships for US Senator Harris Wofford in 1991 and State Senator Mike Dawida in 1992. During law school at Pitt, Patrick “graduated” into the Allegheny County Young Democrats, serving with future PA Auditor General Eugene DePasquale, and eventually becoming President of the organization from 1998-2000. He also served as Vice President of the PA Young Democrats.

In 2013, Patrick was elected the Vice Chair of the Allegheny County Democratic Committee in a special election to fill out the remainder of the unexpired term of Senator Wayne Fontana; in 2014, he was elected to a full term as Vice Chair. In addition to his official party positions, Patrick has been a fixture in Democratic campaigns in Allegheny County, dedicated countless hours to engaging in his community through door-knocking, phone banking, serving on candidates’ fundraising committees, as well as coordinating Election Day operations and volunteering as an election protection attorney.