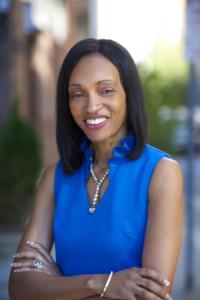 Nicola was born in a poor, working class community in South London, England UK to a single Jamaican mother. As a toddler, she lived in Jamaica before moving to Brooklyn, NY at age seven (7). Nicola’s mother worked hard to create an opportunity for her in the country, and she set an example of grit and grace which instilled in Nicola the value of hard work.

Nicola graduated from Slippery Rock University in 1993 and Duquesne Law in 1996. She has been married to Robert Taylor since 1999. They live with their two (2) children, Madison and Wesley in the North Hills of Pittsburgh.

Nicola has spent more than twenty (20) years working in Family and Criminal courts, and has come to appreciate what makes a good judge – fairness, compassion, respect, diligence, efficiency, and hard work. Her work as an advocate, teacher, and volunteer in the law shows that she has the skills and the temperament to do the job.

Nicola brings her perspectives as an immigrant, a woman of color, and an adoptive mom to her work — important perspectives as we face challenging times with implicit and systemic bias and in our criminal justice system. She has served with dozens of organizations over the years to empower others and be a strong role model.