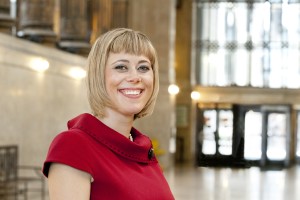 Councilmember Natalia Rudiak represents Pittsburgh’s fourth district on City Council District 4 is the area covering the neighborhoods of Beechview, Bon Air, Brookline, Carrick, Overbrook, a portion of Mount Washington. On November 3, 2009, Natalia was elected to City Council with more than 98% of the vote after winning the Democratic Primary the previous May. She was re-elected on November 5, 2013 and was sworn in for a second term on January 6, 2014.

Natalia’s professional experience is in management and technology. She previously worked at Deloitte Consulting, where she implemented a state-wide information technology system. She has also done press work for the United States Senate in Washington, D.C. and worked for a public health organization in New York promoting safe and healthy motherhood.

Natalia earned her bachelor’s degree from George Washington University through scholarships from the Pennsylvania and national AFL-CIO.  During her undergraduate career, she studied at the London School of Economics and Political Science as well as the Jagiellonian University in Poland.  Born and raised in South Pittsburgh, she graduated from Carrick High School and Carnegie Mellon University, where she earned a master’s degree in Public Policy and Management.

Natalia was named one of the 40 Under 40 by PUMP and Pittsburgh Magazine in 2009, and was voted Young Democrat of the Year in 2011 by the Young Democrats of Allegheny County. She was then named a 2012 Outstanding Elected Democratic Woman by the Pennsylvania Federation of Democratic Women. In April of 2013, Natalia was named Pennsylvania State Director of the Young Elected Officials Network.

Natalia is currently a Board Member of both the Carnegie Library of Pittsburgh as well as the Pittsburgh Economic & Industrial Development Corporation. The Young Elected Officials Network in 2014 awarded Natalia the prestigious Leadership Award for her work engaging young elected officials in the State of Pennsylvania.