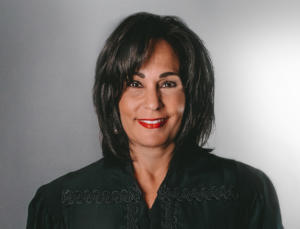 Judge McLaughlin grew up in the Overbrook section of West Philadelphia. She received her undergraduate degree from Penn State University and her law degree from Delaware Law School-Widener University. It is fortuitous that during her final year of law school, Judge McLaughlin clerked for the President Judge of the Superior Court, where she is now a member.

Upon graduation from law school and for the next 19 years, Judge McLaughlin worked as an Assistant District Attorney in Philadelphia and later as Chief of the Child Support Enforcement Unit. She was one of the youngest female Chiefs ever appointed in Philadelphia. Her life was dedicated to protecting the rights of children. As a single mother and judge on the Court of Common Pleas, Family Division, of utmost importance to her was continuing to safeguard the rights of children. Judge McLaughlin is known for her commitment and compassion both on and off the bench.

Giving back to the community was instilled in Judge McLaughlin from an early age. As a young child her parents would take her to spend time at a local orphanage, bearing gifts for the holidays, along with making sandwiches and delivering them to the homeless. These are traditions she continues with her own sons.

Throughout her legal career, Judge McLaughlin has dedicated numerous hours off the bench to various organizations, including, anti-violence, anti-drug, re-entry programs and youth organizations. She spent time working with women in prisons, helping them hone their interview skills so they might increase their chances of success outside the prison system.

Judge McLaughlin appears often as an instructor and/or guest speaker on a variety of topics for the Pennsylvania Bar Association, Pennsylvania Bar Institute, local bar associations around Pennsylvania, primary, middle and high schools, and universities and law schools throughout the Commonwealth.

There is nothing more important to Judge McLaughlin than family. She and her husband, Jonathan Saidel treasure their blended family, sharing six adult children and four grandchildren.