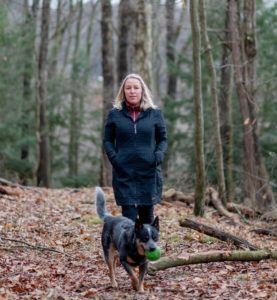 Mandy Steele is a Fox Chapel Councilperson, founder and operator of two nonprofits, mom of four, and graduate of the University of Pittsburgh. Her hard work, coalition building, and passion has brought her uniquely qualifying experience and expertise.

In 2019, Mandy ran for Council in Fox Chapel after years of organizing in the community and petitioning for access and change. She won. In fact, she is the first Democrat and first female elected to Council after running in its first contested election in its almost 100 year history. As soon as she took office, she hit the ground running.

While on Council, Mandy has led the charge to ban Coal Tar, a main component in our air and water pollution, making her municipality the first in Pennsylvania to ban the substance. She championed the removal of a racial slur against Native American women from named places in the community, a term that has since been recognized by the Department of the Interior as a racial slur. Additionally, due to her efforts, Mandy’s community became an early adopter of a solar installation that will power municipal functions with clean energy while saving taxpayer money. All of this while navigating entering a global pandemic three months into her tenure.

In her spare time, she takes what she learns on Council, and she works outward, knowing that none of us succeed until all of us succeed. She has, thus far, presented and influenced the passage of the ban on Coal Tar in 20 Southwestern PA municipalities. She has also begun working with school districts and other municipalities to consider solar energy.

In the past year, Mandy has united with her mayor to form the Fox Chapel Parks Conservancy, a nonprofit dedicated to the community’s green spaces and conservation. She also runs an operation that supports West African girls receiving funding for their education through goat breeding programs.

Born and raised in O’Hara TWP alongside her four siblings, Mandy grew up hearing stories of relatives that built the steel bridges that span the Allegheny. Her family taught her to take pride in her community – to give back, to serve. Mandy and her husband are raising their four kids not far from where she grew up and instilling in them those same values. They are growing up caring for a small backyard farm with goats, chickens, and guinea fowl, learning to hunt and fish, and care for our neighbors.

Mandy Steele has deep roots here and intimately understands the hardworking families that built our communities – that is her family and her story. She knows that with a hardworking State Representative in District 33 who is willing to bring everyone to the table, we can rebuild our valley into the vibrant economic hub it once was.