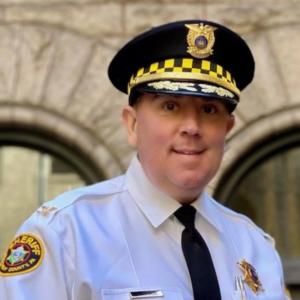 Kevin M. Kraus was appointed to Chief Deputy of the Allegheny County Sheriff’s Office on June 5, 2014 by Sheriff William P. Mullen where he continues to serve today.

As Chief Deputy, Kevin is second in command at the Sheriff’s Office and tirelessly oversees and manages the daily operations of 169 sworn and 34 civilian personnel within the Civil, Courts and Investigations divisions.

Back in March of 1993, Kevin became a police officer with the respected Pittsburgh Bureau of Police. He served the City of Pittsburgh for 21 esteemed years and worked through the ranks of Detective, Sergeant and Lieutenant. For 12 years, he served as Lieutenant of Major Crimes, Investigations Branch, responding to and overseeing the criminal and administrative investigations of all police-involved incidents entailing serious injury or death to any party, responding to homicide and major crime scenes and managing those investigations while commanding a staff of 9 supervisors and 100 detectives within the 12 divisions of Major Crimes. He was also entrusted to serve as the Interim Commander of the Zone 5 station, which is the city’s most active police district.

He may be recognized by most for his 11 years serving as the Pittsburgh Bureau of Police media spokesperson and the coordinator of the Allegheny County Crime Stoppers of Pennsylvania television program.

He also received numerous acclamations and was the recipient of the prestigious Pittsburgh Bureau of Police Officer of the Year award for leadership performance, as well as the agency’s Meritorious Service Award for his effective implementation of crime suppression strategies. He also received the Law Enforcement Agency Directors award for outstanding leadership performance.

Spearheaded drive-thru mobile Firearms License to Carry events and launched the reopening of the Firearms Division with online appointment scheduling and dedicated Deputy Sheriff’s to safeguard health and safety procedures during the COVID-19 pandemic.

Endorsed leading-edge technology to align with the Sheriff’s Office commitment to provide the highest degree of public service expressly in response to recent events and the demand of transparency while protecting our law enforcement officers who put their lives on the line every day.

Served Allegheny County residents by working with community partners and mobilizing resources through food, school supplies, clothing and toy donation and distribution as well as coronavirus prevention and safety literature for over 10,000 senior citizens.