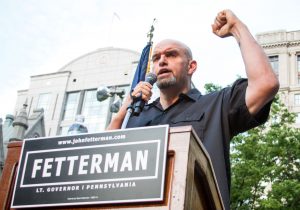 During the last 13 years as mayor, John Fetterman has built the town of Braddock back from economic devastation. He’s applied a hands-on approach to rebuild his community, bringing creative urban policy solutions to Braddock. Whether it’s building community partnerships so that no home in Braddock suffers from heat insecurity, or marrying same-sex couples under protest from the state, John has a proven track record of fighting for the impoverished, the working poor, and the underrepresented. He has always protected communities that are often left abandoned. As Lieutenant Governor, John will make sure all voices of Pennsylvania are heard, whether they are from West Philly, or Monessen, or Bethlehem.