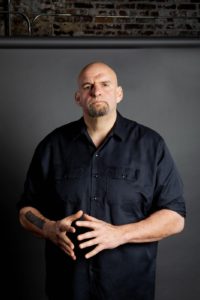 John first settled in Braddock, where he still lives, spearheading a program helping kids get their GEDs and find jobs. John decided to run for Mayor after two of his students were shot and killed, and he made it his mission to reduce gun violence. John was elected Mayor of Braddock in 2005 after winning his first race by one vote.

As Mayor, John created opportunities for Braddock youth, brought in new business and jobs, and helped restore access to health care after a hospital closed. John served as Mayor of Braddock for 13 years, and one of his proudest achievements is going 5 ½ years without a loss of life due to gun violence in Braddock.

In 2018, John ran to be Pennsylvania’s Lieutenant Governor, and won a five-way Democratic primary and a commanding victory in the general election.

As Lt. Governor, John has transformed the position into a bully pulpit to fight for LGBTQ+ Pennsylvanians, unions, raising the state minimum wage, criminal justice reform, and marijuana legalization.

In this race, we have to be honest that 2022 is going to be a hard year for Democrats. To win in Pennsylvania in a year like this, we’re going to have to do things differently. John’s campaign is going to turn the map on its head, and compete for votes in all 67 counties. We can not cede county after county to the Republicans.

In running for Senate this year, John is supporting the same core set of truths that he has been advancing for the last 20 years. He believes that the country is plagued by rampant inequality, a paltry minimum wage that has not changed in the last 12 years, poor housing and healthcare in marginalized and abandoned communities, a broken criminal justice system, a failed war on drugs, and continued restrictions on the right to vote.

John is going to Washington to get things done for the working people of Pennsylvania. That means fighting for the same issues he has been fighting for for years. He never had to evolve, and you’ll always know where John stands.