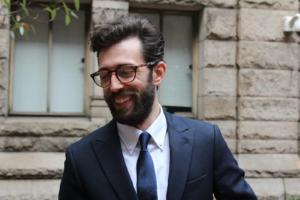 Jessel was born and raised in the community of Forest Hills; for more than the last decade, he and his family have called the City of Pittsburgh’s South Side home.

After graduating from Pittsburgh’s Central Catholic High School, Jessel attended the University of Pittsburgh, graduating with degrees in Philosophy and English Literature. As a student, Jessel was an active writer for the Pitt News, on the executive board of his academic honors fraternity, and worked as an intern for both the Pennsylvania Department of Labor and Industry, as well as Pittsburgh City Councilwoman Darlene Harris.

Jessel earned his J.D. from the Duquesne University School of Law. There, he served as a Senator on the Student Bar Association, and as a writer and editor for Juris Magazine. Jessel also participated in internships with the Pennsylvania Securities Commission, the City of Pittsburgh Law Department, and worked through the Law School’s Clinic program to provide legal assistance to residents dealing with real estate assessment appeals.

In Jessel’s near decade as an attorney, he has gained experience that few other attorneys normally see over their entire careers; working on both sides of a trial, as a public defender AND a prosecutor.

Jessel began his career as an attorney at the Allegheny County Office of the Public Defender. As an Assistant Public Defender, he handled hundreds of cases and clients in all levels of the court system. For the past 6 years, Jessel served as a Deputy Attorney General prosecuting some of the most heinous crimes imaginable: child sexual abuse and child pornography offenses. As a Deputy Attorney General, he presided over hundreds of investigations and cases in more than 20 counties throughout western Pennsylvania. Jessel now works in private practice where he specializes in criminal defense cases.

At a young age, Jessel learned that giving back is an important part of building your community. He takes part in various civic activities, is an active member of Pennsylvania’s State Democratic Committee, and every year in November, he serves as a volunteer election protection coordinator for the Pennsylvania Democratic Party—working to ensure elections across the state are fair and accessible to all.