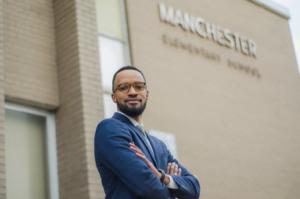 Jehosha Wright is a Counselor, Lifestyle Health Coach, and Candidate for Magisterial District Judge on the lower Northside. His dichotomous experience of growing up in Manchester and learning in challenging public school settings motivated him to be better. Since 2012, he has been intentional in his efforts to fill his experiences with continued education and opportunities to grow as a leader. Jehosha has been recognized for his significant leadership contributions at Carlow University where he earned his Bachelor’s degree. He was a driving force in the University’s efforts to diversify the growing student population. Jehosha went on to obtain his Master’s degree for Clinical Mental Health Counseling as a means to strengthen his altruistic approach to leadership. He is now a Health Coach with UPMC where he uses his counseling skill set to encourage members to make lifestyle changes that improve their overall health and wellness.
As a promising professional, Jehosha was introduced to Pittsburgh’s philanthropic landscape in 2015 with The Door Campaign. He spent his time there assisting with the development of the 2020 Vision Program where they developed a STEM curriculum for both Pittsburgh Public and Charter Schools. Jehosha served as a Community Outreach Specialist for Fineview and Perry Hilltop Citizen’s Council. During his time with the Citizen’s Council, he was able to help the organization craft a youth development program that taught students of Perry High School about community leadership. However, Jehosha’s desire to influence change in the political realm was fortified through his experience working as a drug and alcohol therapist at an alternative correctional facility. He found that his role as therapist was reactionary which was part of the problem at large. Jehosha used that experience as an impetus to fuel his desire for proactive leadership.