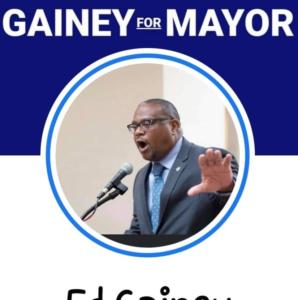 Ed Gainey was born and raised in Pittsburgh by a single teenage mom with the help of her mother. When he was young, the family moved from the Hill District to Lawn Street in South Oakland, where they were the second black family to live on the street. There, they found the beginnings of an integrated neighborhood. Police officers would patrol the neighborhood because the importance of community policing was recognized and respected. Neighbors were always looking out for one another. Kids of different races and backgrounds played together. Most of the families knew each other, watched out for each other, and kept an eye on each other’s kids.

At the age of seven, Ed’s family moved to the Liberty Park High Rise & Low Rise in East Liberty. There, he watched as that housing complex transitioned from a safe place to live to one taken over by the drug culture; from a community where families could live in safety to one where they prayed and struggled to prevent their children from falling victim to the streets. Unfortunately, stories like this are not unique to Ed’s family, or East Liberty. These hardships are still a reality for Pittsburghers of all backgrounds across all parts of the City, many of whom have waited too long for help that hasn’t come.

Ed watched as friends that went to jail and childhood friends were lost to violence and drugs. These experiences made Ed want to find a path to fight for a better future for his community and the City as a whole. Politics wasn’t a natural first step for Ed in finding that path, because politics wasn’t part of his daily life growing up. As a child, he had never met a politician, had one knock on his door, or come to his school to talk to his neighbors about the struggles they were facing or their dreams for the future. That changed when he attended Morgan State University and Mayor Kurt Schmoke, a Black Mayor who was the first politician Ed had ever encountered. Mayor Schmoke helped the students and faculty of Morgan State resist a takeover attempt from the University of Maryland and Keep Morgan State an independent Historically Black University. This experience taught Ed that politics be a powerful tool to fight injustice, uplift communities and ultimately uplift an entire city.

After graduating from Morgan State, Ed returned home to Pittsburgh with a clear vision of the path he wanted to take. He was determined to learn about and work in community development in order to build bridges and help forgotten communities flourish and take pride in our city. He knew what it was like to feel forgotten, and has spent his career working to give people hope and a brighter future by fighting for a living wage, building a city that is affordable for all, and giving everyone a fair shot.

Ed has worked on the staffs of two Mayors as a Community Development Specialist, where he introduced programs such as the “The 52 Weeks of Peace”, “Minority Business Seminar”, and worked with the Pittsburgh Police Department on hiring practices. In 2012, he was elected to the Pennsylvania House of Representatives. For most of the people he grew up with, his election was the first time they’d ever had a relationship with an elected official. In office, he’s committed himself to bringing new leadership and vision and building trust in the diverse neighborhoods that make up the 24th Legislative District, fighting for an increase to Pennsylvania’s Minimum Wage, for transportation projects and funding for mass transit, for criminal justice reforms, for medicinal marijuana legalization, and for quality education. Ed was recently recognized by the Pittsburgh City Paper for ”2020 Politician of the Year” for using my platform to not only educate but to uplift communities.

Ed and his wife Michelle Gainey (Coburn) have been married for 13 years, and have three children. Their oldest daughter is a graduate of California University and has a master’s degree from Villanova University, and the two youngest attend Pittsburgh Public Schools. Ed and Michelle have raised their children to understand the importance of being involved in their community, and the Gaineys are deeply committed to the city they love and call home