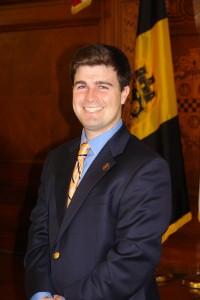 A life-long Democrat, he served on the Platform Committee at the 2012 Democratic convention. The notable website “Politics PA” named O’Connor one of Pennsylvania’s top “30 Under 30” and in 2010, he was selected as Allegheny County Young Democrat of the Year.

As councilman, O’Connor is proud to have been behind many legislation endeavors such as: establishing an HIV/AIDS Commission; working cooperatively to create an Assessment Appeal Assistance Program; sponsoring legislation to end parking meter enforcement after 6 PM; and launching “Corey’s Crew,” a group consisting of volunteers who troubleshoot, clean lots, help senior citizens, and assist at community events. As Chair of City Council’s Committee on Urban Recreation, O’Connor has toured almost every city park and visited dozens of Recreation and Senior Centers.

A graduate of Central Catholic High School, Corey became the youngest varsity sport coach in the history of the WPIAL at age 20.  He earned his Bachelors Degree in Elementary Education from Duquesne University. The Councilman was a Squirrel Hill Little League baseball coach for ten years and was twice honored as Coach of the Year. A regular participant with the city’s Redd Up Team, O’Connor also serves on several boards and commissions, including the Allegheny County Sanitary Authority (ALCOSAN), Children’s Home of Pittsburgh, Lemieux Family Center, Holocaust Center, First Tee of Pittsburgh, VisitPgh, and the Cancer Caring Center.