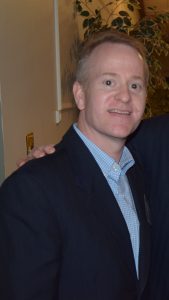 Byron Timmins has a distinguished career in leadership, business management, and community activism. He has the experience, and more importantly, the Common Sense we desperately need in Harrisburg.

Byron is running for State Representative in Pennsylvania’s 46th District to restore our once vibrant middle class, increase educational and career opportunities, and protect working families. Byron grew up outside of Columbus, where he learned the value of hard work and integrity from his attorney father and school nurse mother.

Determined to make a difference in the lives of others, Byron worked his way through Miami University (Ohio) and, upon graduation, was recruited into the buying program of Kaufmann’s Department Stores. Kaufmann’s was a pillar of our community, and he was proud to work there. Unfortunately, after September 11th, the economy took a momentous downturn. May Company, Kaufmann’s parent company, decided to close their buying office in Pittsburgh and 1,200 people (our friends, our family, our neighbors) lost their jobs. Byron was one of them. Following his time at Kaufmann’s, Byron worked ten years for the Nautica apparel company, rising through the ranks to become the Senior Manager of the Retail Coordinator Program for the United States and Canada. After yet another downsizing campaign, Byron’s position was cut. Subsequently, he accepted a position as a merchandiser with Acosta, where he continues to work today.

He knows what it feels like to be unemployed; the stress, and the uncertainty, of not knowing how you’ll pay your bills. We saw it with Kaufmann’s, but our region has also experienced economic insecurity following downsizing at US Airways and U.S. Steel. These issues are personal for Byron, and that’s why he will fight tirelessly to preserve our existing jobs, while attracting investment for burgeoning industries.

On a personal level, Byron is a devoted husband and father who loves his community. He lives in Cecil Township with his wife, Astrid, and their son, Dane. He has served as a volunteer with the Canon-McMillan Parent Council, where he worked to improve educational opportunities for students. Prior to that, he volunteered with the Muse Elementary Parent Faculty Association. He coaches Dek Hockey, as hockey, teamwork, and encouraging our youth are passions of his.

Education is an emphasis for Byron, and he has witnessed firsthand the troubling effects of school funding crises emanating from Harrisburg’s inability to craft an equitable budget. That is why he supports NO BUDGET/NO PAY legislation! If you’re not doing your job, you shouldn’t get paid. It’s common sense. He is a champion for organized labor, and will always support collective bargaining rights, prevailing wages, and increased workplace safety provisions. He will proudly stand alongside Leader Dermody as the Democrats take back the House and move Pennsylvania forward.