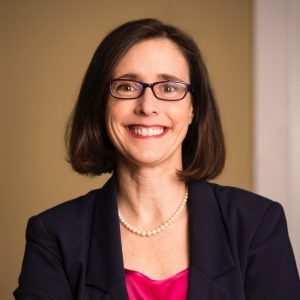 Betsy Monroe (Elizabeth Monroe) is an experienced professional who has worked in the Pittsburgh healthcare industry for more than ten years. She works every day to make health insurance more affordable for over a hundred thousand older Pennsylvanians.

Betsy is also a married mother of three teenagers, two in the local public school district and one a recent grad. Service to her community has always been a big part of Betsy’s life, including serving as PTO treasurer for her children’s schools for five years, leading a Girl Scout troop and volunteering for trail maintenance. More recently she served for five years as Assistant Scoutmaster with the local Boy Scout troop.

Participating in the 2017 Women’s March on Washington was a turning point, inspiring her with a new degree of determination to stop politics as usual. She started with letters and phone calls to her representatives supporting issues including women’s health and fair redistricting, but couldn’t see enough impact from those efforts. So she decided to take bolder action.

It’s time for the Republican’s hold on House District 30 to end. This district has been painted red for decades and it’s time to turn it blue. Betsy is the candidate to do so. Why? Because we need a representative who believes in democracy and in a government that serves the people, not just the majority party. Because our community deserves a representative who will fight to protect the health and wellbeing of our families rather than pandering to big business. And because we need a representative who understands that protecting women’s reproductive rights is ethical, lifesaving, and necessary.