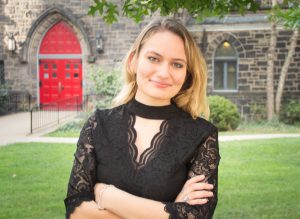 Ashley Lynn Priore is Pittsburgh native and a current student at the University of Pittsburgh, majoring in English and Business with a focus on political science, legal studies, and psychology. An award-winning and nationally ranked player under the United States Chess Federation, Ashley is a competitive chess player, writer and poet, and social entrepreneur. In 2014, Ashley founded The Queen’s Gambit Chess Institute, a Pittsburgh based non-profit organization dedicated to teaching chess to the community and ensuring every child has the necessary tools and opportunities to learn the game through a twenty-first-century approach to education. A chess educator, programmer, and leader around the city, Ashley and the Queen’s Gambit have made partnerships with Pittsburgh City Government, Carnegie Library of Pittsburgh, Remake Learning, City Schools and many more to use chess to impact the city. Ashley is an innovate speaker and activist with a message to change the greater community through positive leadership. She started playing competitive chess at the age of four and began teaching at eight years old. Ashley currently serves as the only female and youngest board member of the Pittsburgh Chess Club, the PA Chess Coordinator under the Women’s Committee, and a member of the Advisory Team for Kidsburgh. Ashley is also a member of the Pittsburgh Women’s Alliance and Women in Digital Pittsburgh. Ashley is a catalyst for change who started her own business at the early age of 14 years old.